Our erratic mood-lifting-through-pop-video thing hiccups back into life with this joyously ridiculous clip for the new-ish single from Pigs Pigs Pigs Pigs Pigs Pigs Pigs. ‘Hell’s Teeth’ is the triumphant finale of Viscerals, the third album from our most fearlessly silly metal warriors. The single release comes with an electronic deconstruction from label mate J. Zunz. This superb video accompaniment is an irresistible ride into danger with an iguana at the wheel, naturally. Really, if this can’t raise a smile it’s time to take the cheap wine to the park bench and wait for the end – all the signs point to it not being long now. But hopefully before that they’ll get to tour this album next spring and we won’t all be terrified to go.

Hello there friends. It’s been a while. It’s been weird, huh? Remember back in the day when we all used to read blogs? And moan about the ones that posted too many youtube links because broadband was shakey and dial-up was murder? Yeah you do. Stuart Maconie will be giving it the gruff dismissal /faraway sigh combo on ‘I Love the 00’s’ before you know it. Anyway, now nobody cares or reads blogs but broadband is less shakey (although nationally owned and superfast would be better) we can post all the youtube clips we like and no one will care or, possibly, know.

2020 is a year that has truly united humanity to cry out in the night alone but also with one voice “THIS IS SHIT! I mean, I thought 2017 and 18 were shit but fucksakes are you kidding me with this?”

So, in an attempt to find our dropped smart phone in the chemical toilet that is life right now, I thought I’d post up some videos of great stuff from 2020 to show that even here, in this cavalcade of unbelievable human twattery, there is light and joy and good to be found in people.

As much to convince myself as anything. Why not start with Hen Ogledd? New Album Future Humans is an absolute charmer, very much unlike almost anything else around and ‘Trouble’ is a solid gold pop smash from a parallel, better, world that we can’t afford passage to. Fairly sure it previously had a more home made video clip but this ones nice too.

Have a good weekend.

Apparently it’s a whole year since Supernormal returned as good if not better after taking 2018 off. Forced into another missed year, here’s some pictures I never got around to posting from 2019. A splendid weekend, the weather was agreeable, the company delightful and the music mostly excellent. Here follows a bunch of adequate photographs and random comments . . . 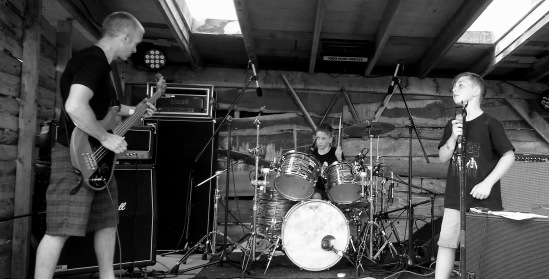 Friday kicked off on the shed stage with Birmingham’s small but mighty HAQ123 churning out the pre-teen doom with considerable aplomb. The band themselves avoid any dressing up foolishness but are joined by an alien and the imposing figure of the reaper himself for a fiery ‘Deathmaker’. It’s no exaggeration to say the kids have grown up at this festival, a couple of years ago the were stage diving to Big Lad and Cattle. In an interesting innovation they complete their set on stage and then crowd surf off to some pre-recorded hold music… 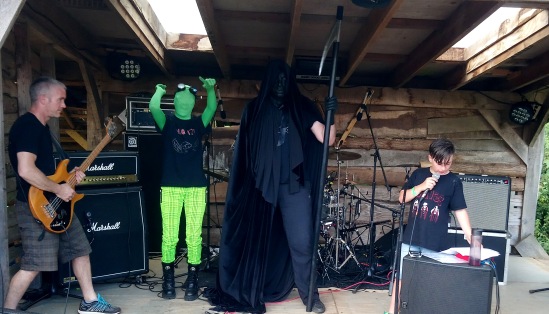 Haq123 with green alien and deathmaker 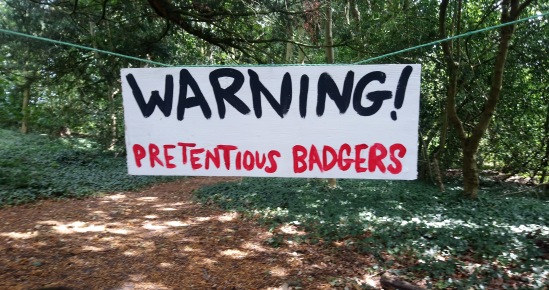 I say Horse! you say… BASTARD!! Not only is their name tremendous fun to say, or just randomly yell, but they call themselves ‘Equestrian blastcore’. It’s clear Horsebastard don’t take themselves entirely seriously. We’re expecting them to be sloppily entertaining but they turn out to be exhiliratingly sharp, furiously well drilled power violence. They go over a storm and are suddenly everyone’s new favourite band. 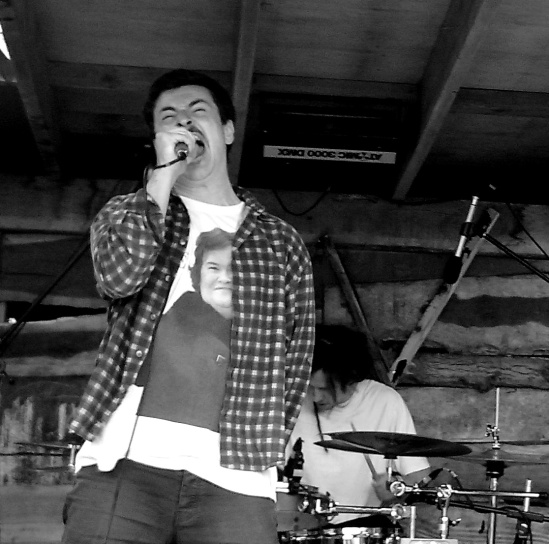 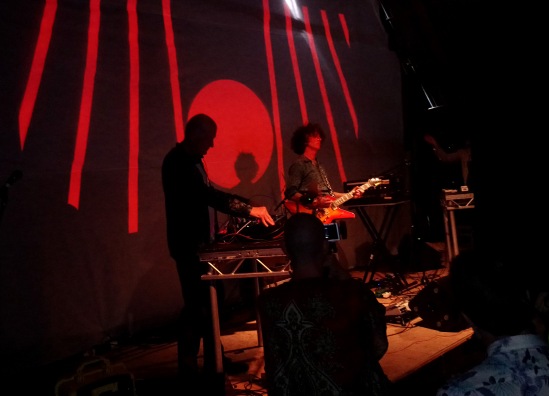 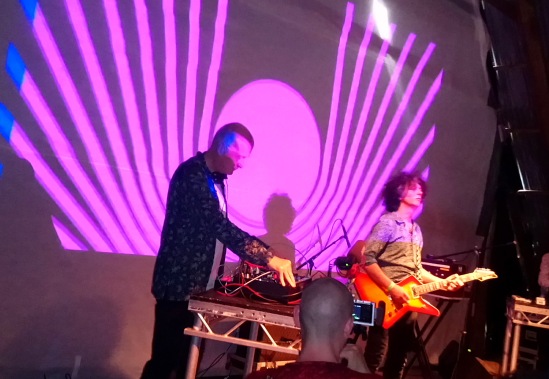 Meanwhile, in the Vortex, The Utopia Strong are churning out a curious but pleasing blend of modular synth and kraut-prog explorations. Steve Davis twiddles knobs like a snooker champion. 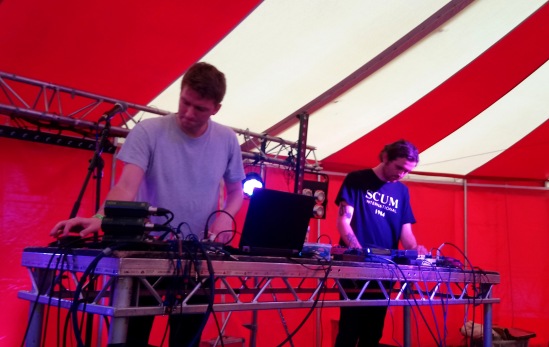 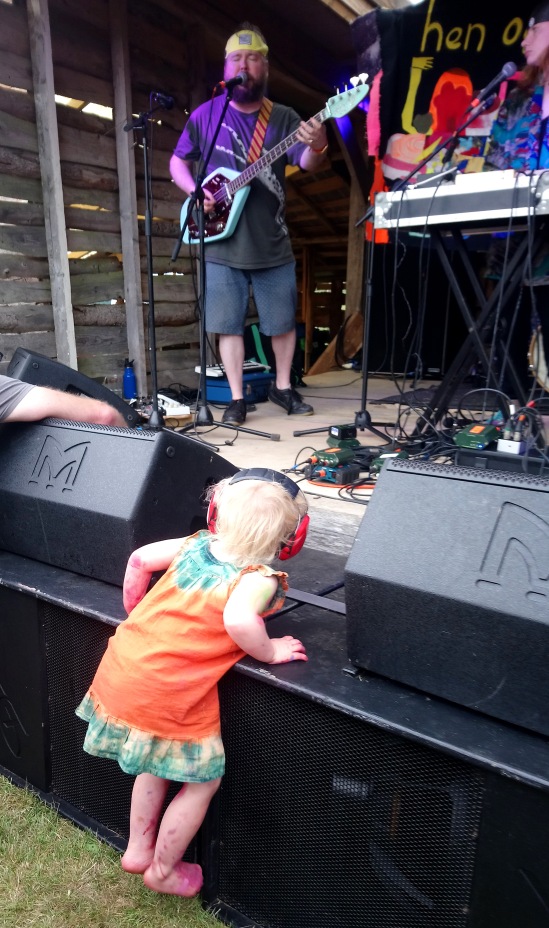 Dawson for all ages 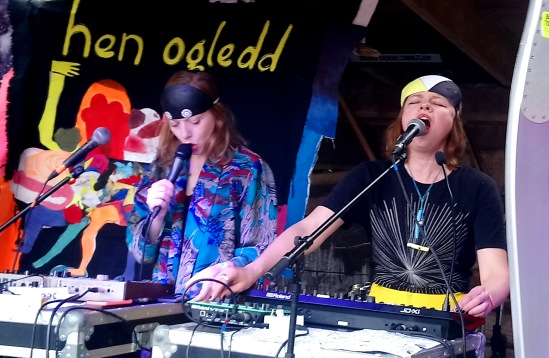 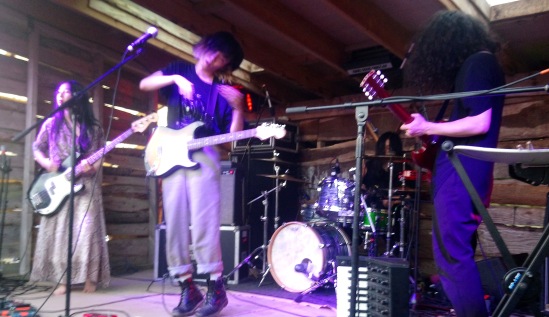 GG Allan Partridge get Sunday going with some feisty, unholy racket. It’s uplifting despite some technical issues. They trot offstage in style accompanied by the Black Beauty theme 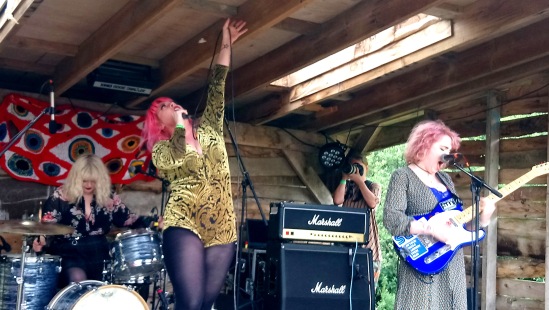 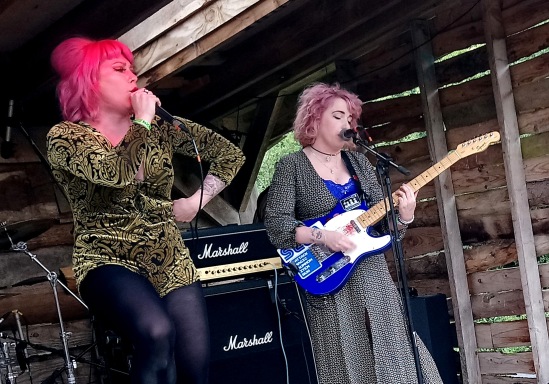 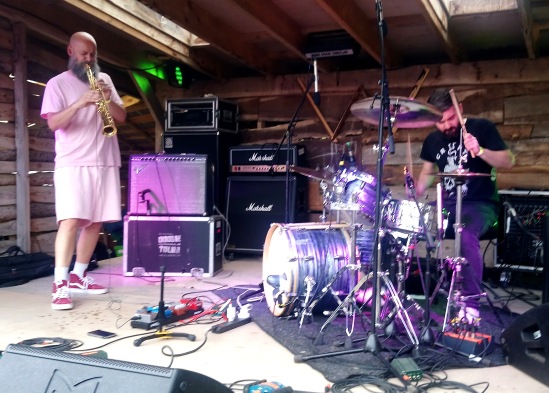 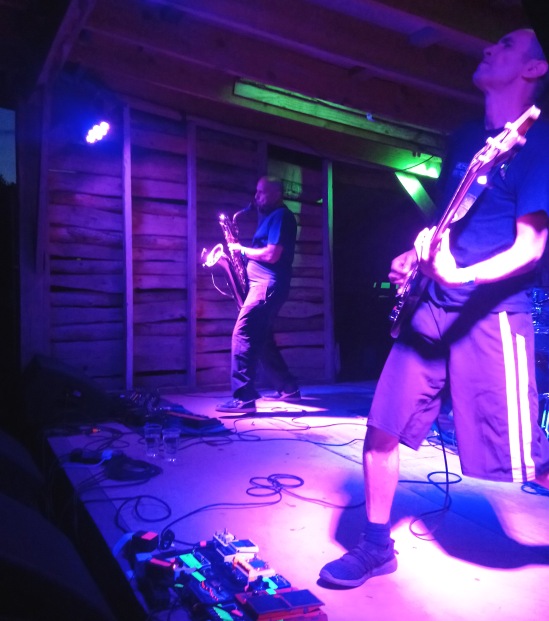 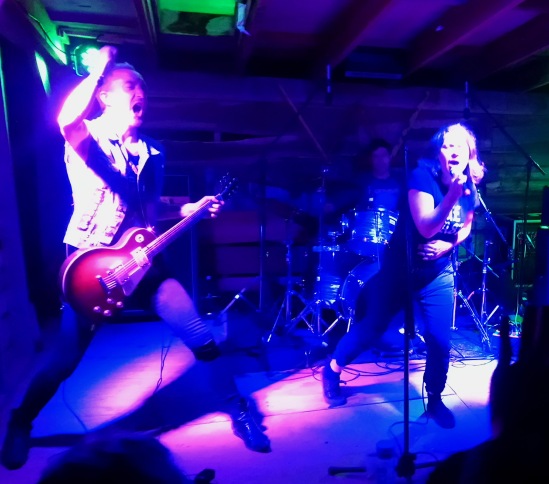 Some time ago, back in the days of Basic FM (RIP), I hit on the idea of creating a mix that started with a one second track and went up in increments of one second until the mix was 24 hours long. I did the maths (I’d need 418 songs, the last of which would be 6 minutes long and would need to be faded a bit early) and started to pick the tracks. Then, as with most things, it got forgotten.

Lockdown led me to consider the idea again and I inevitably realised that past a certain point the whole thing stopped being interesting and instead just became a mix of slowly lengthening tracks. Indeed, it seemed to hit this point around the the one-minute mark where doodles and interludes stopped and songs started.  So I decided to limit the project to 60 tracks, from 1 to 60 seconds in length.

I deliberately did no research so I’m sure this has been done before, probably better.

For the third year, Gary Lang (St James Infirmary etc) has organised The Great August The First Exhibition, inviting submissions from the ‘public’ (ie the shadowy cabal of disgruntled artists and malcontent musicians that make up his social circle) to be made on or before August 1st. As the man says, it’s an opportunity for us all to say “‘I made this today’. it can be anything you like,a poem, a song, a drawing, a hinge, an omelette, a painted toenail, owt that takes yer fancy. Just a way to be able to say at the end of the day,, no matter how good or shitty, I made this today.”

This seemed like the ideal forum for my 60 Seconds Of Madness* mix so here it is.

There were a surprising number of decisions needing to be made to put this together, so here are the ‘rules’ I made myself:

04 The Million Dollar Quartet – Too Much Monkey Business

06 The Bob’s Burgers Cast – Buckle It Up

11 Gravediggaz – Just When You Thought It Was Over (Intro)

23 Unknown – We Walk Around The Streets

46 zoviet: france – Waiting At The Gate

54 Chumbawamba – When An Old Man Dies

55 Thelonious Monk With John Coltrane – Abide With Me

At times like this we need heroes. Praise be then for Joe Colossus, who has decided to invest the vast fortune he’s amassed from Hey Colossus, Henry Blacker and being a logistics industry kingpin, by setting up an indie record label. Old school style – 100-run vinyl releases, personal taste curation, all that good good stuff.

First up is a new album from Reigns, the crazy sound of young Wessex. And judging by the full tilt folk horror eeriness of the lead track it’s going to be great.

After that, new releases from Sweet Williams and Acidliner (aka Rhys from Hey Colossus).

This is all very inspiring stuff. Pre-orders already flying out so don’t sit on this. 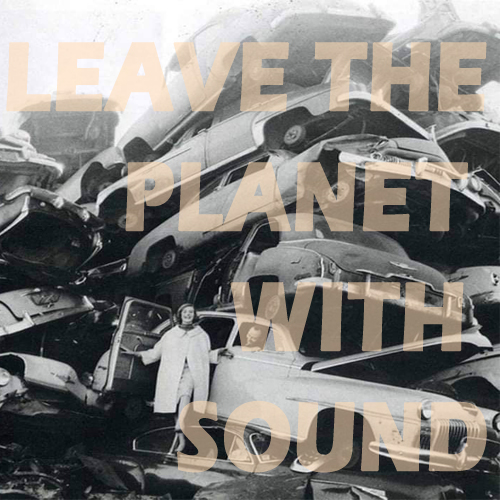 I was honoured to be asked to knock up a mix by the mighty Opal Tapes, and since I’ve been all melancholy country and soul and whatnot lately, I got deeply into making something deep and dirty and bassy and abrasive. And here’s the result. There’s a lot of looking back fondly to the glory days of breakcore and Brixton and 414 and Ambush Records in here too. 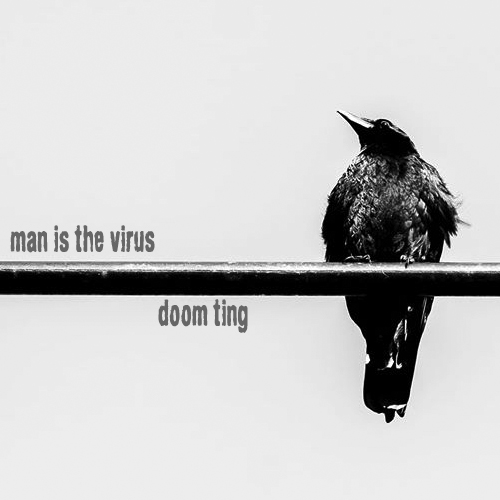 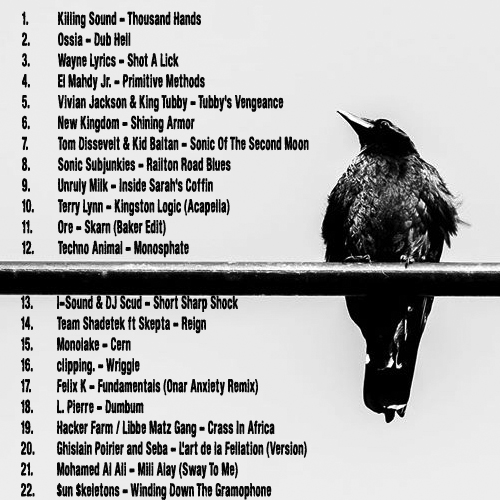 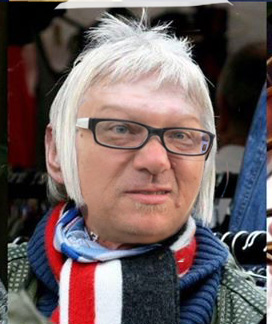 The mighty Blóm are dangerously close to releasing their debut album Flower Violence (on Box Records) which is coming out just after their tour supporting Pigs x7, a double whammy that proves once and for all that Newcastle roolz and Birmingham droolz.

And here’s a video for the single, Be Kind. So much pink, so much RAAAARRRGGGHHH!

Rumours that the B-side is a version of Sea Coal backed by The Wilson Family could not be confirmed as we went to press.

Our Listing On The Face book

Our Listing On The Face book